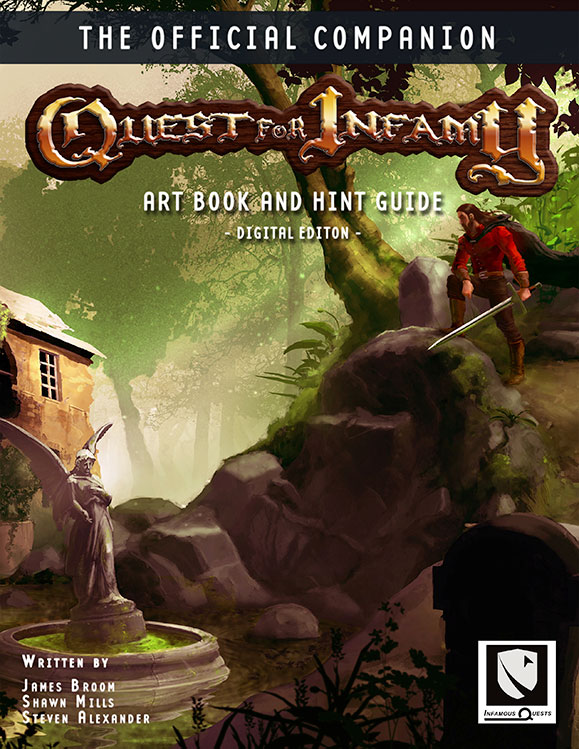 This is the Official Companion to Quest For Infamy that features production art, sketches, hints, interviews and more! Go behind the scenes and find out how this epic point and click adventure game was created from the ground up!

With more than 300+ pieces of art, sketches, production designs and notes, this book will tell you everything you ever wanted (or needed!) to know about Quest for Infamy! Download the Official Companion PDF today!

We will be selling physical copies of the Companion on demand very soon.

About the QFI Companion

We loved playing adventure games when we were young – I bet many of you did too – and now, you can play an old school adventure like you used to know with Infamous Quests release Quest For Infamy.

A fun thing about some of the old adventure games were the hint books – sometimes they used to be the only way to get you through a problem! But they were also fun, too – with their decoder windows, hidden messages and red herrings! They were awesome to get along side the games.

In addition, some game series had their own “companion books” – the books fleshed out the locations, characters and history behind the development of the games and they would also have some amazing art in there in addition to all the neat info!

The amazing artists who brought Quest For Infamy to life are an incredible team, who worked hand in hand and side by side with project director Steven “Bt” Alexander.

Jenny Pattison – Jenny was the lead portrait artist on Quest For Infamy.  She designed, drew and painted every talking portrait in the game.

Jeremy Kitchen – Jeremy was the Art Director on Quest For Infamy – he not only created the style and look of the game, but he made many backgrounds himself – and sketched out almost all the layouts of every screen personally.  He is also responsible for over 2,000 frames of animation!

Jason Lamb – Jason was a background artist, a concept artist and sketch designer on Quest For Infamy.  He worked on many of the final backgrounds you’ll see in the game.

Jon Stoll - Jon was a background artist, character and environmental animator on Quest For Infamy!  A man of many talents, he helped bring the world to life!

Elissa Ng – Elissa’s talented eye helped create many of the backgrounds that populate the town of Volksville and The Valley of Krasna, including many moody yet colourful forest backgrounds in the game.

Ivan Ulyanov – Ivan’s amazing touch brought life to so many places in the game – including the graveyard and the Port City of Tyr!

Arseni Kondratenko - is an animator extraordinaire, and did many of the in game character animations you’ll see.

Shane Stevens – an experienced animator in the adventure game field, having worked on games like Resonance and Mage’s Initiation, Shane brings his talent to Quest For Infamy, helping to animate many of the enemies you’ll fight in the game!

Daniel Thomas – Daniel helped create the lush backgrounds of the Port City of Tyr, based on Jeremy’s designs!

Matthew Oates – Matt helped not only on backgrounds, but he created the Quest For Infamy logo.

Matt Frith – Matt did many of the little pixel animations in the game!