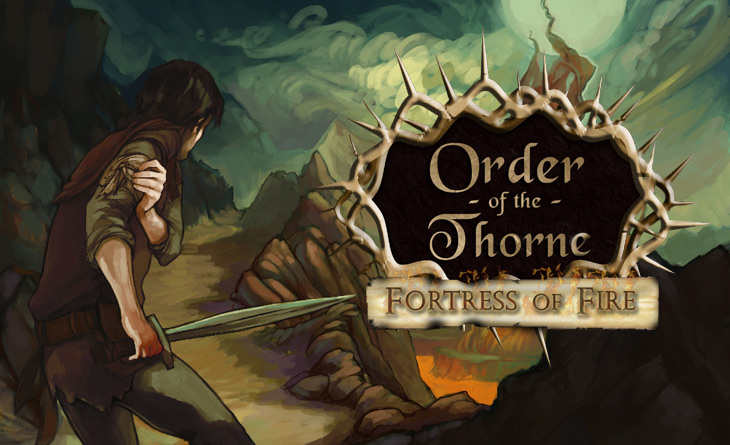 Order of the Thorne: Fortress of Fire

Fortress of Fire is the second title in our Order of the Thorne anthology series. You play as Patrick, a squire of the noble Sir Caradoc.

Sir Caradoc, a noble Knight of the Order of the Thorne, is summoned to the castle stronghold of the Order. The Grand Master of The Order, Aoife (pronounced ee-fa) had been hearing reports of disturbing happenings in the Land of Sunlight. Some months ago, she had sent a monk of the Order, Brother Eoin, to investigate the old monastery in the valley, but no contact had been made since he departed. The rumours of a darkness over the land and of a massive fortress appearing there overnight, were disturbing indeed. She decided more information was required and tasked Sir Caradoc with visiting the Land of Sunlight and investigating the occurrences. What has happened to the former monastery and what is happening in the land? What became of Brother Eoin?

Taking his trusty Squire Patrick with him, they set out across the realm for the Land of Sunlight. As they passed through the caves that mark the entrance to the Kingdom of Light, they stopped to look out over what was now a dark, desolate place with a massive fortress rising into the sky. Suddenly, they were best by a fierce and vicious enemy, and Sir Caradoc was captured while Patrick was rendered unconscious and fell down a gully. When he woke, he climbed to the top of the hill again – Caradoc was gone, but his sword remained. Patrick picks up the word, and with resolve, sets out to rescue his master.

How much is this going to cost?
We will announce pricing closer to the release.

Is this going to be on Steam?
Our plans are to make this available through Steam and other online platforms.

What engine did you use to make this?
We use Adventure Game Studio, an engine specifically for the creation of adventure games. We have worked with this engine before with Quest for Infamy and found it to be the ideal engine.