First off, I want to apologize. This is a very self-involved post about something that I think about from time to time. Today I was asked by someone I know, “So what do you actually do all day?” followed up after me trying to summarize my typical day, with “It must be fun to play games all day.”

Making games and playing games are poles apart, I’m sorry to say. And there’s two roles I take at Infamous Quests. One is the creative side. I create games, whether it be design or programming or the occasional piece of artwork. The other side is the business side and that’s the side that takes most of my working day.

END_OF_DOCUMENT_TOKEN_TO_BE_REPLACED

Infamous Quest’s co-founder Steven Alexander (aka Blackthorne) will be at PAX East this weekend and will feature as a panelist for “Reboot Our Roots: Bringing Our Favorite Games Back to Life”, along with other prominent indie adventure game developers such as Katie Hallahan of Phoenix Online Studios and Dave Gilbert of Wadjet Eye Games.

The panel seeks to answer the following question: “Many of today’s indie games are spiritual successors of yesteryear’s hits, from King’s Quest to Gabriel Knight to Quest for Glory—with some even being developed by the same teams that brought us the originals. What’s it like to reboot a franchise or genre after 30 years? How do you update a classic while staying true to the original? Industry veterans share their stories of revisiting their roots, taking up their heroes’ mantles, and what they’ve learned in the intervening years.”

You can find out more about the event here.

The other exciting news is that we will be announcing our next projects as well and give an insight into the future of Infamous Quests. We’ll be posting the announcement on the blog too so keep a look out!

Greetings! We all hope you’ve had a very nice Christmas and relaxing break over the holidays. 2014 sure was an exciting year for us. In March we attended GDC in San Francisco where we got to showcase our first commercial release, Quest for Infamy, to the games media and other developers from far and wide – all organised by the great folks at Phoenix Online who were our major publisher for Quest for Infamy. In July we saw the release of Quest for Infamy and we’re still to this day blown away all by the comments, feedback and kind words we’ve received on our first commercial outing. Thank to everyone who helped back the project back in 2012 and to those who purchased a copy. We hope Quest for Infamy thrives even more-so in the new year.

So, what about 2015? Yes! Things are in motion. You may have noticed our Christmas message this year included a man getting attacked by a bear! What? You’d never seen that before? That’s a scene from our next game, although details are being kept tight at the moment. Keep an ear out thought, we will have some news in the next few weeks. (Ok, his name is Finn.)

The QFI update is still being worked on; we’ve been finding more bugs that resulted from changes and additions, and we still have some voices that need recording. The last thing we want to do is rush it and release a poor update, so it’ll be out when it’s out and properly ready. That will be soon though, we promise! To give you some inside information on what to look forward to, we’ve added in a new minor quest for each of the three classes. You’ll be able to access three previously unseen areas of the game, and if you’re really, really lucky you might be able to see where Voleris sleeps (and get out again alive!) A major tweak to the game is the addition of directed casting for the Mystical Unlock and the Take Inanimate Object spells (ie. you select the spell then click on the item you want to tamper with.) It adds another level of challenge to the sorcerer class and makes it a lot less hand-holdy. The stats have also been tweaked to make sure that every usage of them is tied to a minimum level of statistic (sometimes in the initial release it just worked if you had the skill). So for example, you might need a Thievery skill of 35 to unlock a door. Lots and lots more in there too and we’re working really hard to get it to you.

The Quest For Infamy Companion is still being compiled and edited; with the release of the 1.1 patch, we wanted to make sure we got in all the information we could about the game. The preliminary proofs of the book should be finalized by the end of January, and the final stages of editing and locking down the manuscript should be completed by the end of February. Which means we will be having the book printed sometime in March. The other physical rewards will have been completed before then – so, if all goes according to schedule, physical rewards should start being sent out by Mid-March! We’re very excited about this; creating a big box and goodies for our game is something we have all been looking forward to, and it completes our dream of creating a total classic adventure game experience.

We hope you all have a great new year and we wish you all the best for 2015. We’re looking forward to another awesome year. All the best!

Well, today I’m going to talk to you about the point and click game jam that we’re participating in! You can view the page right here, and there’s already several indie developers who have signed up to participate!

When I saw this, I thought it would be great for us to participate – being involved in your gaming community is probably one of the best things you can do.  Infamous Quests wouldn’t have come to be if the founding members weren’t active in the adventure game communities and forums over a decade ago, and getting involved in this seemed like a great way to help rebuild some of that sense of community.

END_OF_DOCUMENT_TOKEN_TO_BE_REPLACED 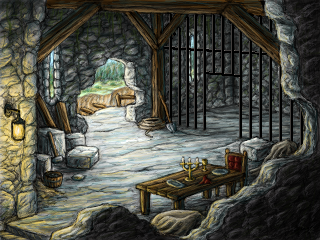 A new room by Lambonius in Quest For Infamy v1.1! Coming soon!

We’re finishing up adding the details on this, and are moving into testing this version THIS WEEK. After making sure no more new bugs creep up, it’ll be time to release it to the public!

If you’ve already purchased the game, it should be updated in the store you bought it from (GoG.com, Steam, Humble, Desura) – with GoG and Humble, you’ll have to re-download the new version – Steam should update automatically after release.

Yes, unfortunately, your old saves will be broken with this update. So we will be sending out another message/update before it goes live on Steam, so you can copy/preserve your old copy and saves. 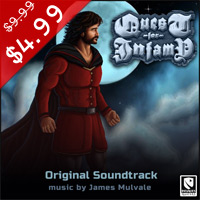 The soundtrack for Quest for Infamy is one of our favorite things about the game and this weekend only we’re giving you chance to get 50% off the official soundtrack’s price – from $9.99 to $4.99! The soundtrack features over 80 original tracks from the game, including a few tracks that never made it to the final version. It’s DRM-free too!

To get started head to the QFI page or click the button below.

Agustin Cordes and the team at Senscape are currently running a Kickstarter campaign to fund the development of what looks to be an amazing game, based on the based on the work of the famed writer, H.P. Lovecraft.

Senscape are the team who brought you Scratches and Serena so they have the track record to show they can make the first official game based on Lovecraft’s work. 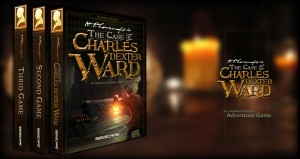 H.P. Lovecraft’s The Case of Charles Dexter Ward by Senscape.

What? That’s not a game by Infamous Quests! Why are you promoting it here, you might ask! Well the simple answer is that it looks bloody awesome and they people at Senscape are friends of ours and … we’re just damn excited about this game so go and support it already if you haven’t, or up your pledge if you have!

So, I’m sitting here, and the hour is growing later here on the East Coast of the United States. This is when my mind starts to get away from me – as if it almost floats two feet to the left of my head, and takes a look back at the man sitting at the keyboard.

I spent a good amount of time this evening recovering information from my old hard-drive from a dead-desktop computer. I found a lot of old IA/IQ materials – almost 10 years worth. I’d been transfering it from computer to computer for almost 10 years…. ideas, concepts… so much work that the public hasn’t seen. Anyone who’s been a member of Infamous Adventures or Infamous Quests can testify to the vast amount of stuff that haunts our forums and servers. It’s a bit of living history, for me – tracking that time.