Infamous Quests is a group of people who love old school adventure games. They came together with the common goal of creating a fantastic game, one that would feel like it had come out of the best of the golden era of adventure games. Founded in 2012 by Steven Alexander and Shawn Mills, Infamous Quests is a dedicated team who are committed to making games we would love to play ourselves. Steve and Shawn, have a decade long game making partnership, overseeing a successful fan group in Infamous Adventures and creating a variety of games.

The core team of Infamous Quests is a group computer game developers who should probably be committed, but instead work their backsides off to make great games. It has been said, that the real history of IQ is somewhat different though.

The History of Infamous Quests 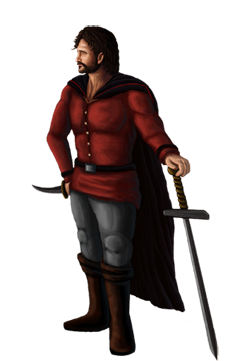 Back at the dawn of time, when the earth was still flat and the old gods walked across the vastness of the universe, the Infamous Two sat and pondered. Who these two are and how they came to be at the beginning of everything is a mystery that has yet to be unrivalled. Some say that they are two travelers from distant worlds, brought together in a common goal of universal domination. Others say that they are the two primal forces of the universe, chaos and order. Some say that anyone trying to work out who they really are should get a life, because there’s plenty of better things to think about.

What is knows, however, is that they are incredibly handsome and pleasing of aspect to all of the fairer sex, and quite a number of those of the masculine sex. After all, these souls ARE only human.

The Infamous Two were, as you might well be aware, all seeing and all knowing. They had seen the future and the great technological marvels to come. The vastness of the human empire moving out into space and conquering the galaxy. The marvels that they had built and the joy of watching people discover them. The great cosmic joke being discovered, told, retold and forgotten, only to be discovered again. They had taken human form and walked the universe meeting and talking to everyone of note from Genghis Khan to Glob Gor the Eleventy-Third.

But even legends, infamous legends at that, get bored. They run out of reality to see and play with. This, then, is the story of how they created the most infamous and awesome adventure game ever. It’s not their greatest story. But it’s a good one. And it’s one worth buying and playing.

One day, it was probably a Tuesday, Blackthorne and Klytos were discussing the universe and all that was held within. It was a long conversation of course, as they both knew and had seen everything within the universe multiple times. To converse on a higher level, as legends tend to do, they were consuming copious amounts of Canadian Beer and Australian Rum. Because these are the two greatest drinks ever created.

“You know what would be cool Klytos?” asked Blackthorne randomly, while he grabbed another beer from the beer fridge and sat back down. “Yes I do Blackthorne,” replied Klytos, “Another beer!” “Too right! But I was thinking about making a NEW adventure game. But, in keeping with our Infamous nature, we should make it so you play a bad guy.”

“What an intriguing thought,” replied Klytos while he took another swig from the rum bottle. “But we’ve got to keep this guy, our villain, as a bad guy. More neutral than evil, because evil is by definition insanity. And that just wouldn’t work in a game.”

“True. And he should have a beard,” Blackthorne said. “Indeed!”

“Let’s gather the infamous together and make this game.”

So from the far reaches of the universe they gathered their team together. The great five, all gifted in their areas. They designed worlds. They designed cities, valleys and rivers.

And thus Quest for Infamy was born.