They’re all useful spells and we’re very happy with the way the magic system works in Quest for Infamy. But two of those spells, Mystical Lockpick and Take Inanimate Object always bothered us a little. We felt the way we set those two spells up was a bit too automatic for players, it took the skill from the game and put it in the hands on the designers. So with this patch we took the opportunity to look at them again and perfect them more.

Previously, if you clicked the Mystical Lockpick spell the game would automatically attempt to open a predetermined door or lock on any particular screen (or return a default “There’s nothing to unlock here” response on any other screen.) In short, that’s boring and way too easy. So now when you click on the Mystical Lockpick spell in your spell book, you will be presented with a casting icon and you will need to click on the door or lock you wish to unlock. The same process goes for the Take Inanimate Object spell. 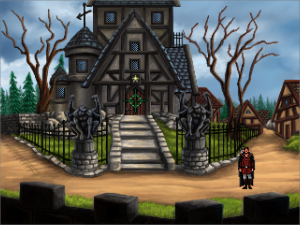 We feel this brings a higher level of game-play to the Sorcerer class, because now the player has to decide what they want to attempt to unlock instead of just casting it on any screen in the hope it opened something. More-so with the Take Inanimate Object spell, the player is now going to need to select the object they want to take!

With these changes we’ve also tweaked the Mystical Power stat so that it’s tied into every possible cast of any direct-cast spells. A door may require a Mystical Power level of 65 to open, so you’ll need to improve your skills to open that door!

So get to it Sorcerer! Start casting those spells already!