Hey guys, just wanted to update you on the patch. Man, it’s looking good! After a few weeks rest to catch our breath, then a couple of cases of flu and a hell of a lot of catch-up on real life, Steve and I are in the final push to get this patch done. Here’s some (some – heaps more in the final version!) sneak peaks at what we’ve done!

* The combat has been tweaked / fixed and the stats – in particular the % weapon hit – will now work properly.
* An overhaul of two magic spells – “Take Inanimate Object” and the “Mystical Lockpick” – to be direct cast (ie. You have to click an icon on the object you want to take etc) instead of just for the room.
* Some re-jigging of quests, nothing major, but making them more logical and less “but that’s the way the designers said to do it!” For example, Visa the hunter will no longer walk randomly around screens, once you find him he’ll wait there for you. And Randy will come out and have words with you if you try to push through the bushes before you know you need to.
* A re-think on the monetary rewards offered for quests so that they’re now more logical and money is going to matter! You’ll need to make decisions about what to buy now, not just buy everything!
* Any bugs that were reported have been fixed. Yep, every single bug that was reported to us since the game was released. Fixed. Unless of course you never told us about something in which case… ARRRGHHH!

You’re going to love it! The downside of a patch of this magnitude is that it will cause all your save-games from pre-patch to cease working. Because we feel bad about that, we’re adding a little bit of extra content for you! Each class will get a new class-specific area / reward and … well, you’ll just to have to play and see! 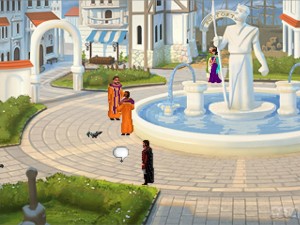 So here’s the timeline. We finish the patch. Then we get it tested, at which time James Mulvale will record the new narrator lines that have been added! Then we’ll make sure it’s all working nicely and BAM! You’ll have a patched game! Once it’s patched, if you’re a backer, you’ll get you hard-copy shortly afterwards.

Quest for Infamy! Now with sprinkles!

Stay Infamous. (Damn, that was lame…)