Just posting a little bit about the pulsing, pounding work going on here at IQ on Quest For Infamy.

Seriously – the team has been cranking out the art and animations for the game like crazy.  It’s insane, really.  We’re also putting all the ducks in a row and getting the programming done for the new Demo V 2.0 – which will be released in December for all the current backers of Quest For Infamy.  It will be released later for the general public.

I’ve attached here some of the promotional shots that we’ve released from Quest For Infamy so far, for anyone who may have missed them.

Well folks, it’s been an amazing Summer for us here at Infamous Quests.

Our Kickstarter Campaign was very succesful, and we’re now marching on – towards Infamy!

This game has been in the works for a while – about a year ago, while racing towards the finish-line with Space Quest 2, I began to put the wheels in motion to get this project started.

I wrote, and I wrote – I made outlines, and got ideas assembled.  I wanted to make sure I had enough stuff to go on, and get a team together to work on this.  I kept plugging at it, a little at a time, while we were running around like a bunch of lunatics, trying to finish up all the details on Space Quest 2.

So when I finally pitched it to Klytos in November, we had a good idea of what we wanted to do.  After talking a short break following SQ2’s launch – we started up Infamous Quests, and the Infamous 7 went to work creating what became the demo.

So, now – we’ve had more talent flock to our banner – and things are progressing really nicely here!  I’ve been on a tear lately, trying to write more and more bits of dialogue, and coming up with more and more puzzles.  I’m excited about the coming months – and I’m excited to show you what we’re up to.

Demo v 2.0 was originally planned to be released during the final week of the Kickstarter – to show the backers that we took some suggestions and implemented them.  However, due to a massive storm in Chucklas’ area, he had no power and was forced to not work on the game, but to sweat his ever-loving face off and occasionally use his iPad to tell us that he was okay, but his freezer had a lot of melted and ruined food.

Now, we’ve decided to take Demo V 2.0 to another level – and add more of the game to it.  What you saw in the demo was part of the game – but there were elements left out – the interiors of more shops in Volksville, and another area of Volksville.  The characters that populate them – and more of the woods that surround the town!  Along with some improved, top-secret game mechanics – we think you’ll find playing the “intro” of the game to be a more satisfying experience.

I do not, as of yet, have the official release date for that – but I can say it will take more time, so it won’t be anytime very very soon.  Probably a couple of months.  But, we’re working on it!

As always, send me your questions, send me your photos of you being Infamous.  Oh, and first person to Cosplay as Roehm gets either a Boxed Copy of the game – if they don’t have one coming, or a small sprite Cameo in the game.  Boo yah.  So, hey, if the mood strikes you at Halloween – let’er rip!

It’s been an AMAZING campaign!  We’ve reached $50,000!  That is double our original funding, and it’s allowed us to do so much more with not only the game, but with the presentation of it and the interaction with fans.  Now, we’ll be able to get the game translated into other languages and reach a wider audience.  I love how adventure games transcend not only time, but also languages, cultures and countries.

I’m proud to be able to call people from all over the globe friends.  This experience, making games, has brought the world into my living room and has brought me into the world at large.  Some people never get that kind of experience, and for that – I thank all of you for allowing it to happen.

And the team is also comprised of people from all across the globe too!  I want to invite you to watch this video – “Meet Team Infamy” and get to better know the people who are making the game.  These guys are all amazing, creative and talented, and I want you to know who you’re supporting.

Check out the art by Jenny Pattison – coming soon in either a poster or on a T-Shirt! 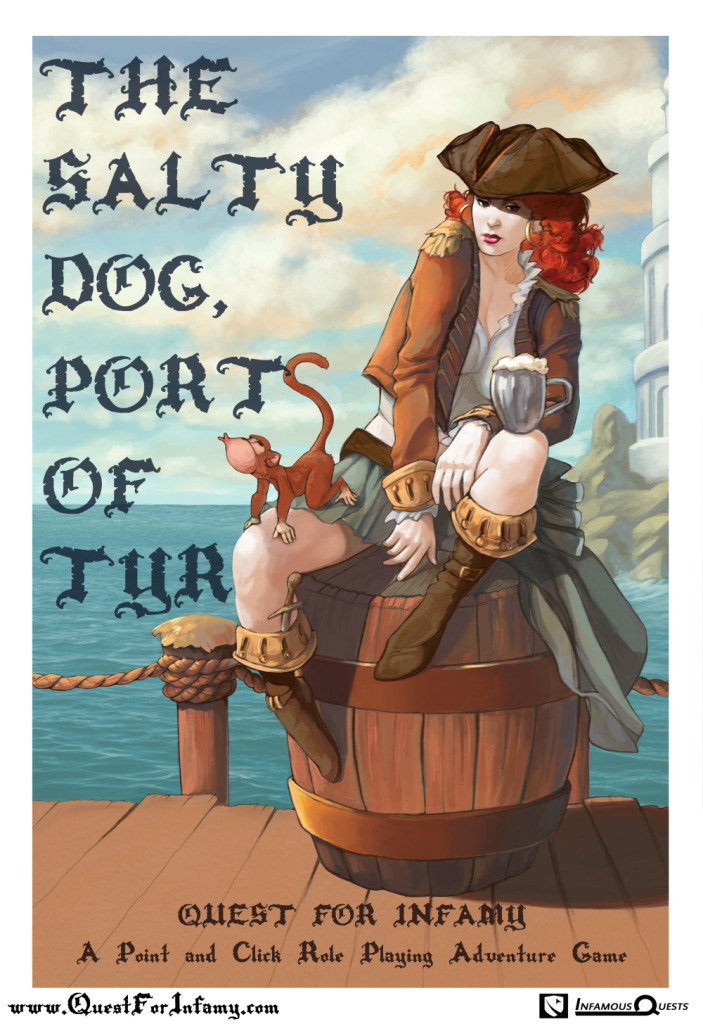 Today we have a new production video for you – a special presentation by Jeremy Kitchen – who animates a series of battle sprites for a character named “Gorth”, a bully from Volksville who has a bone to pick with Roehm.  Check it out!